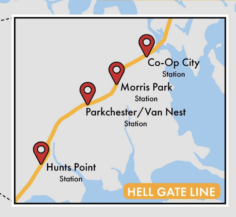 Gov. Kathy Hochul celebrated the groundbreaking of a new Metro-North station in Parkchester on December 9th. The new station is one of four coming to the Bronx.

The governor first announced this project in December 2021, and now less than a year later, she was back to see the Metro-North Penn Station access project.

Riders will be able to take the Metro-North from the Bronx, Westchester and Connecticut to Penn Station and the west side of Manhattan.

The goal is to give folks in the east Bronx a speedier commute. The governor says it’ll make the trip to Penn Station around 50 minutes quicker and even open up new job opportunities.

The four new stations will be in Hunts Point, Parkchester, Morris Park and Co-op City. This is an initiative people in the neighborhoods have been asking for due to many of the areas having very few public transit options.

Applications not available until November 4th, 2022.

Parkchester is currently switching to a new rental application system. Please come back on November 4th to apply for your new apartment. Thank you.