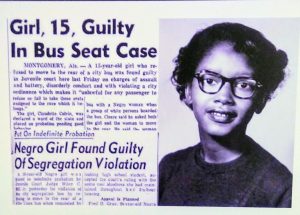 A Bronx street corner now bears the name of an often-overlooked civil rights activist and Parkchester resident, Claudette Colvin. The corner of East Tremont Avenue and Unionport Road was renamed in a co-naming ceremony on Friday, March 6th.

On March 2, 1955, Colvin was arrested at the age of 15 in Montgomery, Alabama, for refusing to give up her seat to a white woman on a crowded, segregated bus, nine months before Rosa Parks took the same action. She became one of four plaintiffs in Browder v. Gayle, which ruled that Montgomery’s segregated bus system was unconstitutional. At the ceremony, Colvin said she hopes the sign will stand as a reminder of what it takes to be free. You can read more about this very courageous civil rights pioneer here.

Applications not available until November 4th, 2022.

Parkchester is currently switching to a new rental application system. Please come back on November 4th to apply for your new apartment. Thank you.